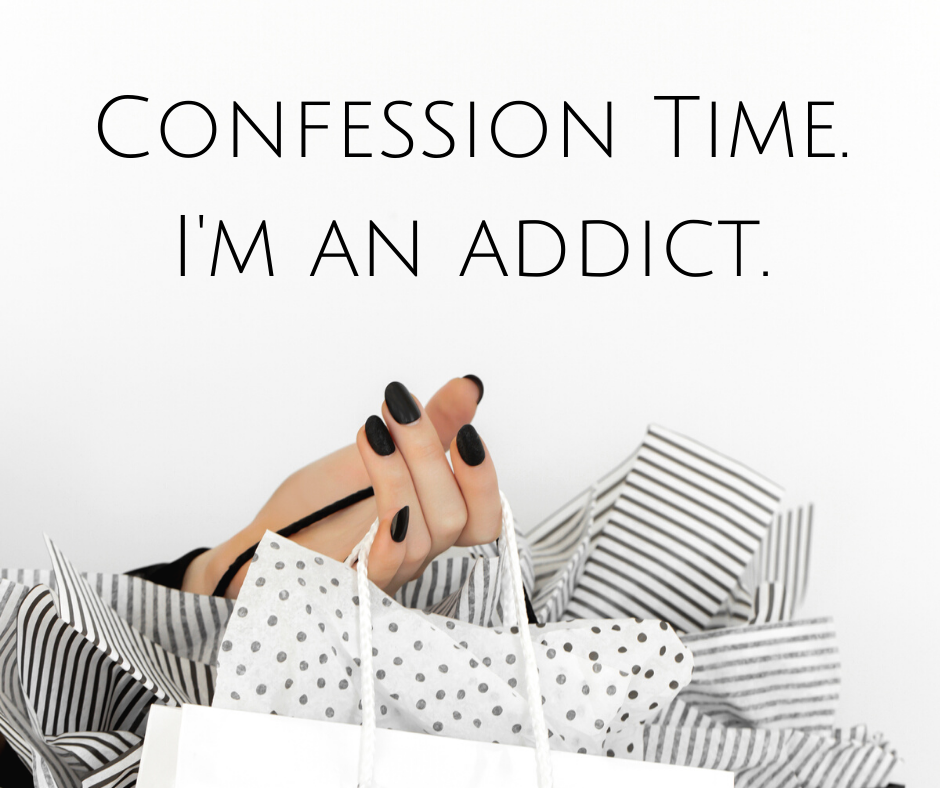 Jesus H Christ. This one smacked me in the face like a BITCH last night. I’m admitting this before I’ve even fully processed it because I know once the fear hits me, I’ll go back into denial.

So here goes (doing this before I’m ready):

I have a spending addiction.

You name it, I’ll buy it (this is just this month):

Holidays villas in Ibiza – 20k for a 2 week vacay

Ostara’s clothes budget for just one month – 1k (seriously she grows too fast… why do children do this?! My cost per wear fashion maths has been ruined!!!)

Sexy lingerie – OK can’t actually admit how much I’ve spent on this because Stephen will see and kill me!

And to be clear, this isn’t ‘reckless’ spending, as in spending money I don’t have… I do have it to spend… but it is spending unnecessarily on things I don’t actually need, and spending extravagantly where it’s not warranted.

To the point where my bank manager called me yesterday to have a conversation . It was shit balls central. I’ve spent 30k this month, over and above what I ‘needed’ to spend. Just because. And that’s not including the super car.

God this is hard to write and admit. I could have an extra 30k in savings right now. But I flittered it away. And here’s the really hard part.

But first a bit of back story.

From age 7 to 19 I was bullied pretty severely. Initially I was the small one in class. Then I was the one with glasses. Then braces. I’ve always been the brainy one, top of my class in everything, and teachers pet. Then I was the one with no boobs (they called me Double A… fuck that crucified my confidence in school). Then I was the frigid one. Then I was the slutty one (in a bid to ditch the frigid title, ffs). I’m sure at one point I was bullied for being ugly. And then for being pretty and ‘stealing the boys in the year above’. I couldn’t win. I became addicted to people pleasing. I couldn’t do enough to throw away my self-respect and self-worth in order to be accepted and loved.

To add insult to injury, one of the ways in which my parents showed and reaffirmed their love for me and my siblings was to SPEND BIG MONEY. We are talking new clothes, shoes, toys, whatever we wanted, every single weekend. For years. They bought me a £17,000 car for my 16th birthday before I was even legally able to drive. My mum spent thousands on designer dresses to make me feel better about being skinny with no boobs from age 13 to 18. That’s a lot of money on dresses I grew out of! (Do you see the pattern with my spending on Ostara? Face palm.)

It’s traumatic. And abhorrent. And frankly sickening. Money was my cover up for the absence of love & acceptance in my life.

And so when I looked at all the spending, just in the last 25 days, I asked myself, where am I spending the MOST money? And WHY?!

And honestly, it’s on other people… it’s not even on myself.

I spend money on other people to give them a reason to love me. Because to my inner child, I’m not worthy of love just by being me. Because I’ve never been enough for anyone.

I admitted this to Stephen last night, which was really fucking hard and embarrassing. And then I picked up the phone to my mum and told her the same. And this morning I admitted it to my sister, and surprise surprise, she has a similar addiction (!!!), albeit for slightly different reasons, we’ve both learned from our parents that money = love.

I’m sharing this with you for a reason. I may have mastered life and business, but I’m not immune to the human shit, the conditioning, the old stories, and the invisible stuff that we don’t even see until we’re ready to see it.

And here’s the actual point:

In my commitment to mastering my life and business, the invisible shit is making itself known, so I can heal it, and move forward to become an even better version of myself, both in life, and in business.

When you make the shift to becoming the best version of yourself, the same will happen, but you don’t have to figure it out for yourself.

Inside the School of Mastery you’ll be given the motivation, the tools, and the support, to dig deep and reveal all the invisible stuff that’s been holding you back . But instead of letting it just sit there triggering the crap out of you, you’ll be able to admit it, heal it, and then leverage it as a tool for you to use to help your own audience. Mastery of your life and business isn’t just for you, it’s for everyone around you. Mastery has an energy of osmosis. It seeps into everything!

Master your money and you wind up mastering your sex life.

(In my case, it was the reverse. My sex life went through the roof, and so did my income, quickly followed by the reveal of my spending addiction and the aspect of my inner child that needed healing.)

Master your messaging and you wind up mastering communication with your friends & family.

Master your self-talk and you wind up mastering the intuitive gift you use with your clients.

Master your humility, and you wind up mastering authentic grace.

And a word to the wise from a self confessed spending addict… if you’re going to spend, do it for you, spend on your greatest highest good, in a way that will ensure expansion and abundance for YOU.

Fortunately the School of Mastery is only £29, and you can guarantee at some point I’ll be dropping a training in there for my fellow spending addicts. In the meantime I’m going cold turkey for November. Wish me luck!

>>> The School of Mastery is open for enrolment until Friday. Jump in now and get started on your own self mastery. <<<