Braver Than The Fear 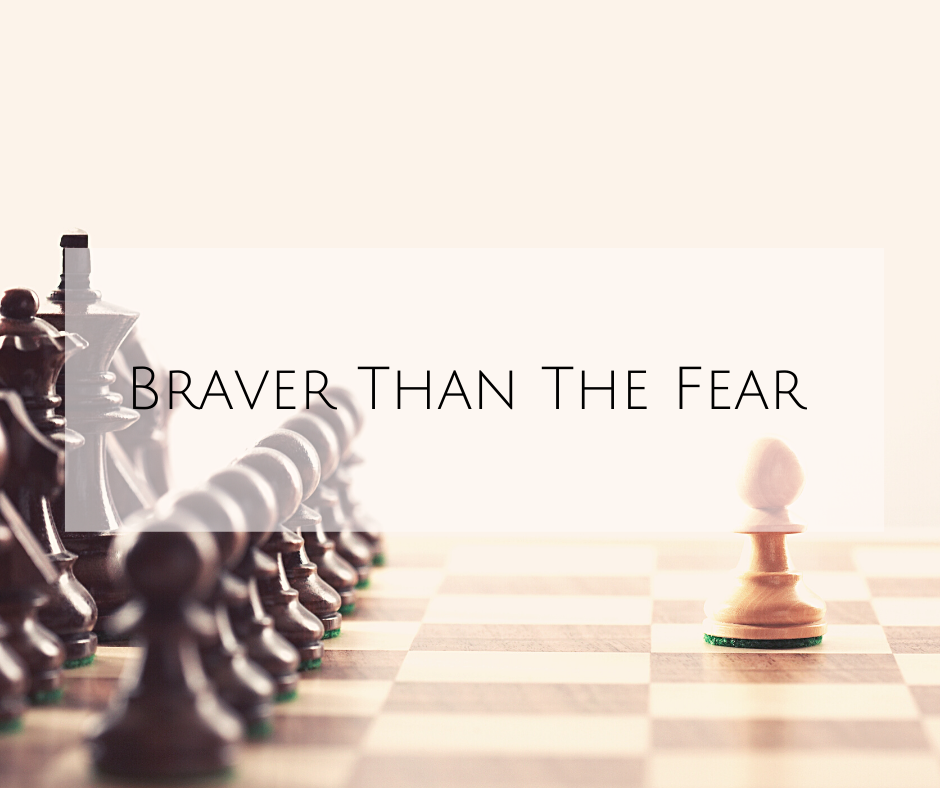 An insight into today’s journal entry:

“Whoever said effort was required to make and receive money? There is no effort required.

Just alignment, flow, energetic availability, a commitment to receiving, and all the money consciousness vibes; the foundation of which is plugging fully into Source, into being the most me I can be.

SO being the most me today, following the nudges of my me-ness, what wants to come through me? What magnetises the fulfilment of today’s desires?

What do I need to know or believe in order to receive today?

If I were truly fully supported in the receiving of all I desire today, what would my action be?”

And as I was pondering my responses to myself, I heard a Ronan Keating classic playing in the background. I think we’re all secret 90s fans here right?! Do you know this one….

“Take your time, think a lot, think of everything you’ve got, for you will still be here tomorrow, but your dreams may not”

If you were deprived of a 90s music education, please go get your fill here: https://open.spotify.com/track/2o1CKuM4MxQHnIEPD3eoGd?si=YqV22NgXQJG5gPXLYJsRAA

Now I’m not pedastooling Mr Keating as some sort of modern day guru for taking big leaps to create change, but he has a point (or perhaps his lyricst does):

If you don’t do something to pursue your dreams today, they may cease to exist tomorrow.

And you know what’s really sad Ellie? Not enough people pursue their dreams. In fact the majority of people give up on their dreams and settle for mediocre lives, never quite fulfilled, always in the same financial position, never really going anywhere, never making any kind of significant change.

The old statistic was that 1% of the world’s population control 99% of the worlds wealth. I believe that figure is inching more towards 2% and 98% but still… it’s a heartbreaking number of people who are walking away from abundance from a place of fear, or lack of knowledge.

From the 6 days to M.O.R.E. Money event I ran last week, 4% of people chose to take the step into their next financial level. If that’s you, HUGE CONGRATULATIONS. You can call yourselves the brave, the bold, the brilliant!

But that means 96% of you literally left money on the table and walked away.

From this microscopic segment of the global population, you can begin to see why 2% of the world control 98% of the world’s wealth… it’s not because they’re greedy, privileged, evil or ruthless in someway (I know there are exceptions to this statement), but predominantly it’s because they’re braver than the fear that holds them back.

The 2%, or in the Ask H family’s particular case, the 4%, see an opportunity and go for it, even though it’s scary AF. They see an opportunity they know can change their lives, whether they’re currently making £0 or £500,000 and they grasp that opportunity with both hands, sometimes with sweaty hands and heart palpitations, and sometimes with a much cooler head because they’re used to this whole knowledge-is-an-investment-that-reaps-abundant-rewards gig (I’m speaking mostly to my 6-figure entrepreneurs here), but either way, THEY TAKE THE OPPORTUNITY.

They do NOT leave money on the table and walk away. They choose to NOT be the majority.

So I speak now to the 96% of you who couldn’t put the fear to onside in order to take that leap.

What helps you get over the fear? There’s only one answer:

FEARLESSNESS: a choice to be braver than the fear.

Thing is when you stare into the eyes of fear, it begins to back down. What we fear is never as bad as we think it is. The fear of the fear is actually worse than the thing you’re fearing.

I’ve pushed my poor husband into many a terrifying situation over the years. He comes from a very un-money-conscious background (you know the typical fear-based, money-doesn’t-grow-on-trees, never-take-a-financial-risk, never-use-a-credit-card, money-is-finite, i’ll-never-make-more-than-my-job-pays type background).

But he married the Money Consciousness Queen. Bless him. He’s literally been through the most intense Money Conscious Bootcamp I think anyone has ever experienced, ever!

But since leaving his job, just 8 months ago, he is now a 6-figure earner, thanks to my forcing Money Consciousness on him! And I’ve repeatedly said to him:

“Baby, trust me, I know money better than anyone you’ll ever meet, I know how this shit works, trust me, I’ve got you”.

And I really have pushed him to make some bloody terrifying decisions given his mindset around money, which was similar to the 96% of you who have so far struggled to make the leap into the MCM. So I do understand where you’re at. I really really do. It’s tough, and I’m not blaming you. Just trying to show you a MUCH MUCH better way.

The Money Consciousness Method never fails. My money knowledge, insight, and understanding, never fails me, or anyone I work with (provided they actually show up to do the damn work… sadly this does not work by osmosis).

Perhaps you just need to hear this: I’ve got you too!

And perhaps you can check out what our alumni have to say, read the success stories of all of my clients, there’s hundreds on my Instagram, and on the MCM info page. You could be a success story too. I’m not particularly special. Neither is Stephen. Neither are any of the MCM alumni. We just took a brave leap, perhaps many brave leaps… then we got practiced at taking brave leaps and reaping the rewards… so we kept leaping!

So, what risks would you take if you knew with absolute certainty they would pay off?!

It’s the knowing bit, the absolute confidence and self-certainty I think many people struggle with. But truthfully the knowing and the trusting are the same thing.

I call it being Money Consciousness. It LOOKS like I’m super confident and super sure that my financial risks and gambles are going to pay off… but it’s not exactly that… it’s more like an absolute trust and faith that my desires will be fulfilled.

The confidence / certainty is actually trust and faith in my desires. It’s the same thing.

When I’ve really gone for something I want with the full power of money consciousness, I’ve never failed to receive exactly what I want.

Money Consciousness never fails. It’s a knowledge, understanding, and embodiment of money that transcends fear or the possibility that you might not get what you want.

Do you want to be controlled by fear, excuses or anxiety? Or do you want to break the habit of a lifetime and transcend from the 96% into the 4%?

There’s no such thing as “can’t”. That’s just translation for “I don’t want to, I’d rather stay where I am” or “I’m too scared. My fear is bigger than my biggest dream”.

I’ve never been one for staying stuck behind fear. Fearlessness is a muscle you can flex and grow, but you have to start somewhere.

What’s it going to be?

I’ve got you. But you’ve only got a few hours until we close the doors for good:

See you on the inside… remember fear of the fear is scarier than the actual fear. I’ve got you. Money Consciousness never fails. This isn’t just an opportunity to up level your money game, it’s the opportunity to change your life. This applies whether you’re making £0 or £500,000.