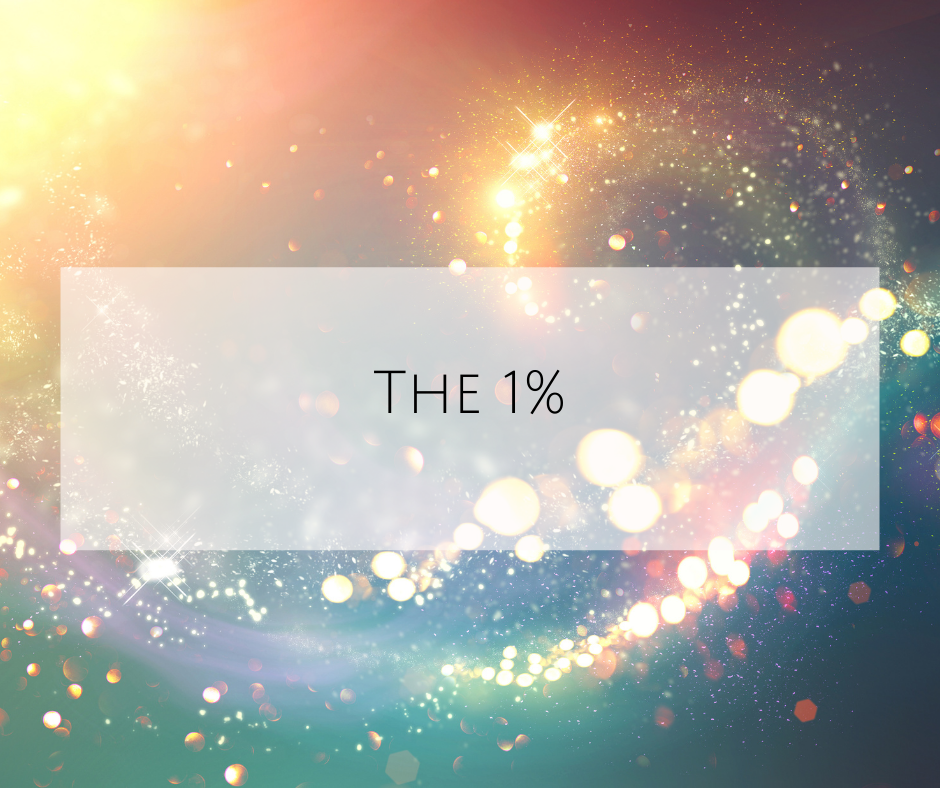 Everyone has heard of the 1%. It’s complained about and blamed all the time. It’s where most people project their scarcity mindsets as an avoidance tactic to actually doing the work to shift into abundance.

Millionaires and billionaires are demonised as “wealth hoarders” and whilst it’s clear there are, shall we say, a less than conscious few that take the mainstream spotlight in this role, the 1% actually have fuck all to do with your ability to create success or receive money. It’s actually got nothing to do with money at all and everything to do with energy (shocker!).

In today’s Shift call, a statistic about the coaching industry was shared…

This is true of pretty much every industry. 89% of people, the overwhelming majority will settle.

It’s the energy they show up in. If you want to be in the 1% you have to show up every damn day in 1% energy.

This means recognising that most of the things you’re chasing are because you want to STOP feeling a certain way, and stop feeling that way today.

It means your devotion HAS to be stronger than your excuses and your fear. Success does not come with an exemption from fear, get ok with it.

You have to hustle. But NOT the bullshit patriarchal version of hustle that requires you to perpetually self sacrifice, burn yourself out and strive to override your human-ness. That’s not the way to sustainable success.
Hustle measures the size of your energy, not the size of your to do list.

It means taking an honest look at how you’re showing up right now and candidly asking yourself what you can shift. What tiny tweaks can you make. What subtle changes can you introduce in a maximum of 3 areas of your life and back those 3 areas 1 million % until you’ve expanded your energy to the point where it can hold the shit days, it can hold the meltdowns, the screw overs, the days when fear threatens to choke the voice out of you.

You are a spiritual being having a human experience.

But you have to devote yourself to the shift.

I wanted a space where those who recognise they are currently in the 89% and are committed to shifting can access the type of space that speaks so deeply to their soul, so passionately and authentically to their desire to contribute in world-changing ways that it literally ushers them into the 1% energy just by being there.

This is not to say there isn’t work involved, but this container breeds magic and transformation. Allow me to let 2 of the ladies currently in it speak for themselves…

“I have been in lots of masterminds over the years. There is NOTHING that I have ever experienced before in the way that Quantum has given back to me. The leader of any Mastermind of the epitome of its success. It is way better than anything I have ever had. Harriette is incredible.”
Denise

“I literally can’t explain how this mastermind has changed my life. I’ve found friends for life. I get a daily ass kicking whether it’s messages directly to me or to others in our group. I trust these ladies with my life. It’s not just about business. It’s about our soul’s purpose. It’s about freedom. It’s about shedding and shifting from what no longer serves! I easily make the payment with my business clients now each month. It pays for itself, as long as you’re committed and willing to trust the process!”
Cassandra

We need money in the hands of the conscious like never before.

We need those stats to flip in favour of the 89%.

Imagine what 100% of the world showing up in 1% energy could achieve? Doesn’t it give you full body chills??

This Mastermind is for women who…

Have a WHY bigger than simply making money – but need to significantly increase their turnover so they can reconnect with that why rather than playing the busy fool.

Women who have the drive to change the world and create a lasting legacy.

Women who are sick of being held back by unrecognisable blocks.

Women who are determined to create a profitable, impactful business being unapologetically themselves.

Women, like me, who recognise this work has to be done collectively in a mastermind container, not on a 1:1 basis. Because there is power in the collective.

Women who need to establish consistent revenue streams and a loyal client base.

Women who are passionate about success, but refuse to do it with a hustle mentality and outdated, icky sales techniques.

Women who are making their first 1k/ 2k/ 3k per month and want to double or triple their profit the Aquarian Way.