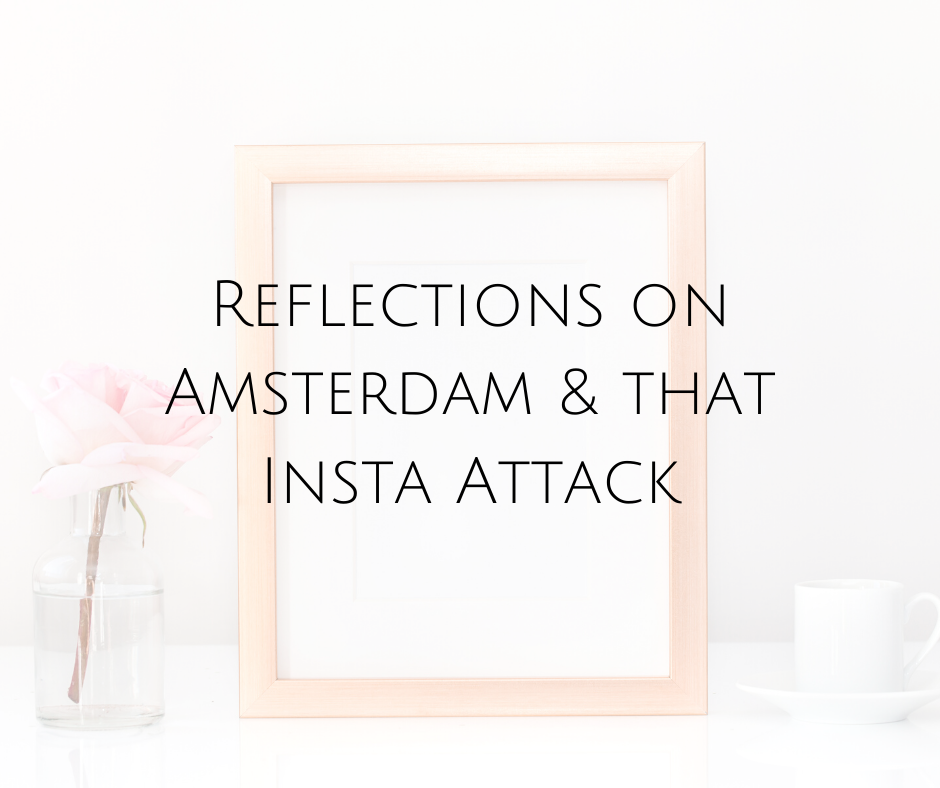 We’re back! 3 days in Dam was nothing like what I had envisaged, but of course… it’s always Divine!

For those of you who follow me on Instagram, you will have seen the hate mail I received from someone I used to know in my late teens, Amy.

Stephen and I visited the Anne Frank Museum whilst in Amsterdam, an experience which moved me so deeply, I fought back the big sobs for two hours until we got back to the hotel room. When we left, Stephen suggested I leave a note in the guestbook, in which I wrote:

“From one Priestess to another, thank you for the work you started. Love always, Harriette Jackson (nee. Hale), High Priestess of Light”

The keyboard warrior on Instagram seemingly took offence to this and sent me a DM:

“I’m afraid you do not have the authority to retroactively assign a role to a woman (which has happened with Jewish women for centuries as they have often had to survive within societies that have imposed whole new identities on them so they are deemed to be more “acceptable”), just because *you think* you relate to her. She did not identify as a priestess, and to attempt to align yourself with her – in her own house – is disrespectful”.

I responded immediately with “Thank you for your opinion. I graciously do not accept your energy into mine. With love always, Harriette.”

And shared on Instagram that I’d issue a full statement on my return to London, but “occasionally messages like these will attempt to break you using Patriarchal feminism, racism, and discriminatory division… the Priestess never bows. She leans in further. Feels more deeply. Loves more fiercely. Always learning. Always teaching. Forever leading.”

So here comes the statement:

A Priestess is a woman whose Power is capable of changing the world & leaving a lasting impact on humanity. We do not desire fame nor fortune, or seek a legacy for egoic satisfaction; we are here simply to be fully present in the embodiment of Aquarian energy. Our embodiment of this energy facilitates independent thought, freedom from Patriarchal conditioning, true abundance, and the strength & courage to speak & teach openly on topics and subjects which create enlightenment, freedom, and abundance for those who listen.

The Aquarian Priestesses have been awakening only since the Aquarian age began, i.e. since 2012, so a woman who possessed Priestess power during the Patriarchal reign, could not, and would not have identified as a Priestess. That is not to say their impact and presence is not felt as powerfully as that of an Aquarian Priestess. Simply because they did not identify, does not mean they didn’t possess the gift.

An Aquarian Priestess can only be initiated into her power through extensive training and an invitation from a High Priestess.

In my message to Anne Frank, I did not retroactively assign a role to her, I simply acknowledged & honoured the presence of the Priestess power within her. Priestess power, which perhaps were she alive today, could be harnessed, trained, and leveraged to create an even greater impact on the world. I have no doubt she will reincarnate as an Aquarian Priestess if she hasn’t already.

Amy’s reference to Jewish women and the atrocities they have suffered is a classic example of the travesty that is patriarchal feminism, which is almost as bad as patriarchal spiritualism. Condemning another woman, or anyone for that matter, under the guise of feminism, or spiritualism, or any other label which promotes division and difference, is the work of the Patriarchy at its finest; convincing people that their beliefs / ideals / missions / life experiences / labels make them in someway, better, or worse, or unreachable, or un-relatable. THIS is how we are all denied Unity and Oneness.  THIS is the goal of the Patriarchy. And thoughts which once sparked the route to freedom, and back to Unity, such as rights for women, freedom for Jews, black lives matter, the me too campaign, and so on, have been meticulously and manipulatively distorted by the Patriarchy so the masses begin to use these movements to condemn each other rather than free each other.

I don’t ‘think’ I relate to Anne Frank. I DON’T relate to her. I never claimed to, and nor could I. My last incarnation died in America before WW2 broke out. I didn’t have a Soul existence in that time. It’s not something I’ve ever experienced. I was deeply moved by the shadow energy that still exists in the walls of the Anne Frank House and museum. I felt the pain, the fear, the loss, the suppression, and the alchemy that took place in those years.

I calculated the numerological energy of every check point as we walked through the museum and used the Aquarian language to decode the hidden energies in Anne Frank’s diaries, to help me understand more deeply what was being communicated on an energetic level, and not just the words she wrote on those pages. The choice of dates and numbers used wouldn’t have been conscious for her, we weren’t coded with Aquarian tools back then, but the Energetic Intelligence was already setting us up for this new world we are creating, and Anne played a massive part in teaching us the necessary lessons to help us shift.

To attempt to align myself with Anne, is in Amy’s words, disrespectful. To be clear, I did not ATTEMPT anything. I DID align with Anne. Very powerfully. Although I suspect alignment means something very different to Amy than it does to me. Recognising and honouring power in another woman is aligned , irrespective of her race, religion, or life experience. Aligning myself with a teenage girl who had a dream and desire to change the world through her work, isn’t just aligned, it’s a conscious AF middle-finger-up to hierarchy, division, and patriarchal feminism.

We can all identify with each other, no matter what labels we choose to give ourselves, or accept from others (begrudgingly or otherwise). We are all human. We all incarnated with the same two intentions:

We are no different. Will I have a museum of my life after I die? Doubt it. Is that necessary for my work to be impactful? Absolutely not.

For the sake of total transparency, my egoic reaction to Amy’s attack was to ask her WTF she knew about being a Priestess, or a persecuted Jew for that matter, knowing that I worked, served, and consequently died, with Mary Magdalene in one of my previous incarnations. But an egoic reaction to messages like these just exacerbates the problem . If I claim to validate my relate-ability to Anne by defining what makes me different, or targeted for my beliefs, then I may as well be doing the Patriarchy’s work for them. I’m not here to do that. I’m here to bring us closer together, closer to Oneness, closer to Divinity.

Yes I identify as a Priestess. Yes I choose to separate myself as someone who sees the world differently, speaks a different language, does life and business completely differently, but my intention is not to remain separated. My intention is that one day 100% of the global population will do life ‘The Priestess Way’, but by that point we won’t call it the Priestess way. We’ll just call it life. And we’ll all do it together in peace and harmony and unity. There won’t be labels, or division, or separation. We won’t condemn or persecute each other. We won’t seek to find our differences. We won’t breed negativity. We will speak the Aquarian language, and we will consciously contribute in the way our Souls intended. Perhaps by then we will be so conscious we won’t need Numerology to understand our Souls and communicate with the Universe, but until then, let me share with you something which will bring you closer to Oneness, to Unity, to Divinity:

>>> Priestess Numerology: The Language of The Aquarian Age <<<

Doors close on Friday. See you in class? I hope so.