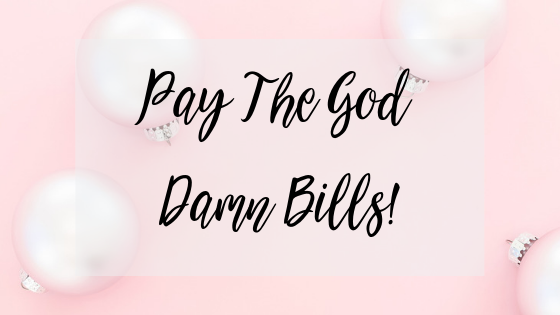 Probably the last bit of advice you want to hear at this time of year Ellie, but it’s a reminder we all need to hear

Far too often I notice people delaying paying bills at this time of year, in an effort to make their money stretch further, to cover the ‘expense’ of Christmas and New Years

But it is extremely intelligent. And energy responds to frequencies in order to receive its expansive direction.

If you are emitting a frequency of “I can’t afford all my bills AND all the things I desire… I have to choose”, then you’re telling money that you’re not available for both.

By emitting this frequency, it quickly becomes your reality. And the more you live in your reality, the harder you mesh in that energy, so the more you emit that frequency that stops the money flowing, and long story short, you end up in a never-ending cycle of lack.

Because ultimately you thought the answer to not having ‘enough’ was to stop the flow of money out of your account, when actually the opposite is true.

If you want to increase the flow of money toward you, you have to get that ball rolling somewhere… which means honouring the money flow moving away from you, i.e. all of your bills and debts.

Do yourself a favour and don’t hold off settling bills and debts until the New Year. Do it now. Before Christmas.

Increase the outward flow of money, and watch it come rushing back to you tenfold.

Begrudging someone else of monies owed to them is only going to result in your money in-flow being blocked too.

Money Mindset and Money Energy is my THANG. I’m the leading export in the UK. I’m the woman who got out of a six figure debt and bought a 1million pound home. If anyone understands money, it’s me.

Unblock your money flow by setting your debts (and paying them with immense gratitude and thanks), and then allow Abundance to start appearing in all areas of your life.

Debts and outstanding bills aren’t fun. It’s a draining energy. Give yourself the gift of a peaceful conscience this year. Pay the god damn bills.

← How’s The Spending Going This Month? What Would It Take For You To Believe? →