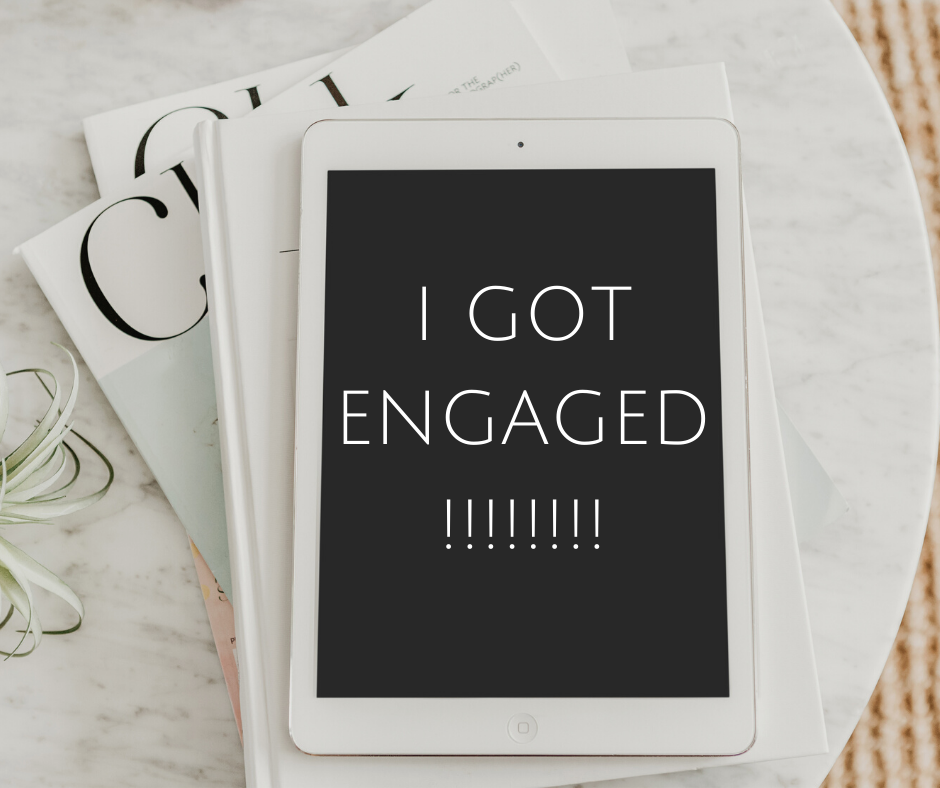 If you’re following me on Instagram you’ll probably know already, but Stephen got down on one knee last week Thursday and asked me to marry him. Obviously I said yes… you’ve all witnessed the impact he’s had on my life since he first kissed me on May 14th. He’s my real life Prince Charming, and I have been utterly and completely swept off my feet.

I wanted to write this email on Friday but decided to give myself the time and space to just revel in the bubble of love we created in that magical moment.

So I took three days out from sharing content and delivering lessons to simply be . The reality of my incredible wonderful life finally hit on Saturday night when I had a moment to myself, and I cried. Blissful, joyful, grateful tears of sheer joy and happiness. I’ve been through so much in my 31 years so far. To finally arrive where I am… in love, in the money, in my dream house, in my dream ‘job’, in the practice that I preach, in High Priestess status… IN all of it. Fully immersed in life and loving every second.

These moments usually come with a powerful lesson for me to share… a form of guidance, or perspective, or witnessing. But today, I know all you really want to know is “how did he do it?!”.

So let me share the story, just for sharings sake. Because who doesn’t love a love story?!

️ I first met Stephen in August 2017. I’d just recently moved into my dream house in North London, and so obviously I needed a new hairdresser in the local area. He was the first stylist I saw, and let’s be real, he’s freakin’ gorgeous, so I decided I needed two appointments a week. Sod doing my own hair when he was literally round the corner. And available. We were both in relationships at the time so nothing blossomed other than a really lovely friendship, and we genuinely looked forward to seeing each other twice a week for almost two years.

In May of 2019, after my 6 year relationship collapsed, Stephen, now also single at this point, invited me for a drink. As friends. Yeah right. He kissed me the minute he saw me, and from that moment on I didn’t stand a chance. One date quickly turned into several, and in a matter of weeks we fell in love. He moved in. And 6 months later he proposed. I will officially be Mrs Jackson in less than 12 months from now.

Bear in mind I’m psychic, Stephen had his work cut out. I already knew he was going to propose on 14/11 (14th November for my US peeps), and I articulated this fact to him several times. 14/11 means a lot to me. It’s a number that has followed me around for years. I see the clock at 14:11 without fail every day, it often pops up in my sales figures, and I’m forever seeing it in signs all over the world whenever I’m travelling.

Last year, when I was told my daughters due date was 7/11 (November 7th), I automatically assumed she would arrive late, on the 14th, because of the signs. That was until Ostara spoke to me from the womb and told me in no uncertain terms that she would not be coming on the 14th, and would be arriving on the “in-between” between October and November. She meant All Hallows Eve. And that’s exactly when she showed up. So 14/11 left me perplexed until Stephen kissed me and I realised 14th November would be our 6 month anniversary.

Knowing exactly what he was up to, I grilled him several times to try gain some clarity (human me is still a control freak lol), and he point blank refused to give anything up, until days before the proposal he started to warn me not to get my hopes up because he “didn’t want me to be disappointed”. He sedated my hopes several times until I actually began to doubt myself. Psychic High Priestess Harriette went quiet, and human, in-love, vulnerable, scared and terrified Harriette stole the show.

The night of November 14th, Stephen re-enacted our first official date. Same restaurant. Same table. It was really sweet actually. But the restaurant wasn’t a proposal spot. Very cool, and classy, but also very busy and noisy… NOT romantic. So my heart dropped a little as I realised where he was taking me. I knew he wouldn’t propose here. At dinner he handed me an anniversary gift. A beautiful bracelet from one of my favourite jewellers. I tried my best to show my surprise and appreciation, but inside I knew a man who gave a bracelet the night of an anticipated proposal, wasn’t going to be giving a ring too. I told myself he obviously wasn’t ready to commit and for the first time in my life I’d actually got it wrong. As dinner came to a close, and they brought out the ‘Happy Anniversary’ dessert plate, I couldn’t even bring myself to Instagram it. I was completely and utterly deflated. And he could tell. He reads me like a book, I can’t hide anything from him.

In a bid to “cheer me up”, he suggested we go for another drink before we headed home. I played along, but honestly, I was devastated and trying really hard to hide it. We jumped in the car and I didn’t even ask where we were going. I didn’t care anymore. I just wanted the night to be over.

Minutes later he pulled up outside the Soho Hotel. The hotel we spent our first night together at on our ‘official’ first date. He insisted it was a spontaneous idea and suggested we get a room, just like we did on our first date. All the hotel staff were in on the pretence, and despite my best arguments to just go home (it’s not fair on the nanny, I don’t have my toothbrush etc etc), Stephen got his way, and feigned booking a standard room. The concierge took us to our ‘spontaneously booked standard room’, and as he opened the door I found myself walking into a suite full of candles, and not just any suite, the very same suite we stayed in that first night, and also one of the best suites in the hotel…. as I turned round to express my bemusement, I clocked the concierge holding his phone up taking photos, and before I could even begin to ask what the fuck was going on, Stephen scooped me up in his arms, uttered the words my Soul has been waiting lifetimes to hear (ones I will never share because they’re just for us), and then got down on one knee and asked me if I’d make him the luckiest man alive.

️ I said yes. In fact I said “yes, yes, yes, a thousand times yes”, and then I cried like a baby, collapsing into his arms with disbelief, shock, joy, elation. relief, and LOVE.

And if this isn’t yet one of the most romantic proposals you’ve ever heard… he proposed with his mums ring. And then told me he’d take me shopping to buy me whatever ring I wanted. Which we are doing tomorrow.

Guys. I have known love. I have loved many times. But I have never known love like this.

And I, I have never allowed myself to receive true love, until him.

Stephen Jackson, I love you. And I will love you every day until the day I die.

Tomorrow… expect some fierce lessons in accountability, personal responsibility, the energy shifts happening on the planet, and of course, Money Consciousness. And, keep an eye out for the Ask Harriette Black Friday offers coming soon. I’ll blow your socks off with the value of what’s coming.

Until then, love always, be kind, and stay vibey!