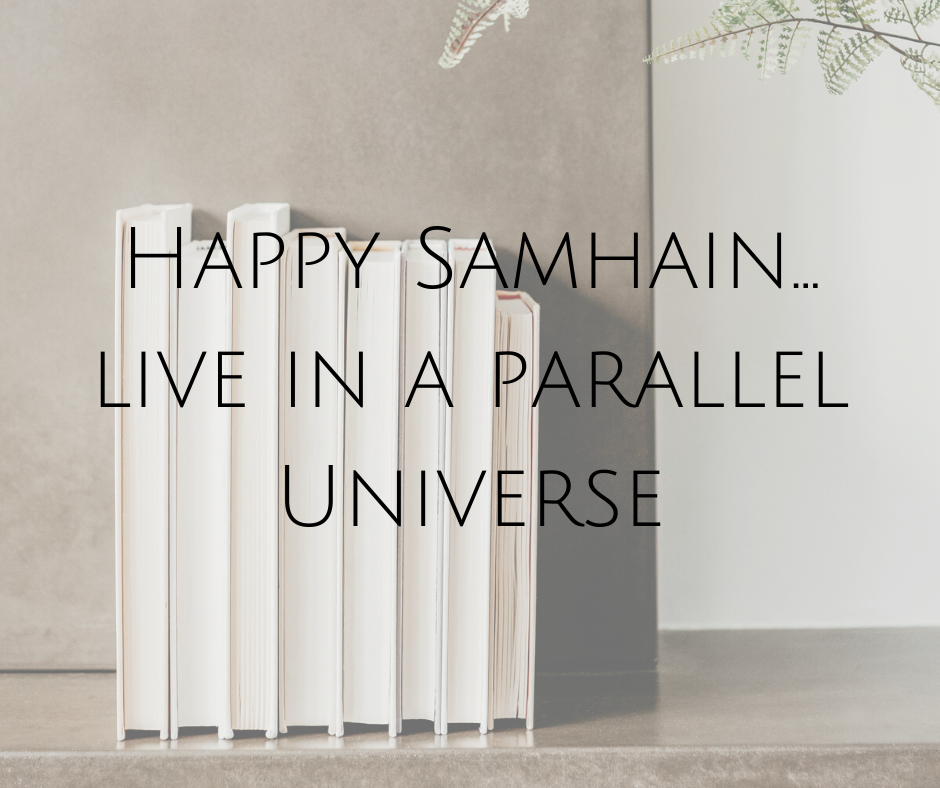 I don’t celebrate Halloween (the commercialised version), but I do honour Samhain, when the veil between worlds thins and beings from the other side come to visit.

If I’m honest I’ve had a foot in the other side for the last week, and tonight the messages are clearer than ever:

Life / Your Experience / This Reality … it’s whatever you want it to be.

But truly, it’s whatever you want it to be.

For me, tonight is all about being with Spirit. Normally I’d be out partying and showcasing my inner witch to the world, dangling voodoo dolls at the Patriarchy, and epitomising all that it is to be truly fearless.

But this year feels different. It’s a little more introspective. Thank you New Moon in Scorpio for that little twist. Well played Universe.

As I write this to you, I’m fully aware of the whispers around me, uttering guidance and granting wishes.

Yes babe, I hear things. And see things. I’ve been seeing new ‘shadows’ for weeks. I even batted one away whilst in the hair salon last week much to Stephen’s amusement because he couldn’t see a damn thing lol!

I’ve become truly Astral in the sense that I’m aware of the aspects of myself that are living in a parallel Universe, whilst I’m maintaining my current reality with you guys. Spooky right?

There’s a whole new download I’ve received about Upper Limiting which I’m dying to share with you , but I’ll make sure Mastery of Upper Limiting appears as a training in the School of Mastery at some point. It truly is an art form!

Just to give you a tiny insight into my current launch (fellow business owners, you’ll really appreciate this):

BUT in the time the cart has been open…

So, as many of you know, all of this would typically have been diagnosed as ‘classic upper limiting’.

BUT, as I’ve spent so much of the last week with a foot in a parallel Universe, I understand this to be something entirely different, and it’s really god damn cool. I can’t wait to share it with you!

In the meantime, let me tell you this… the veils between worlds is thinner than it’s ever been tonight.

If there’s something you’ve given up hope on recently***, that you really desire for yourself, ask for it. Really really ask for it. Say it out loud, think it in your head, feel it in your heart, and even write it down.

And then HAND IT OVER. Let the Spirits take it from you. They WILL deliver. But please let go of control. Even say “if it’s not meant to happen that’s OK, it’s all happening for my highest greatest good”. And then really honestly truly, try and forget about it.

Let the magic happen. This is just the start of how to live in a parallel Universe, and bypass upper limiting for good.

I’ll teach you the rest inside the School of Mastery. Speaking of which… we are now 28 hours away from closing the doors!

See you in class?!

*** p.s. please note… for this to work as powerfully as I desire for you, please ask for something you’ve recently given up hope on, something that has been rattling around your head, or weighing heavy on your heart… it won’t work as well if you’re asking for something entirely new that hasn’t been in your energy recently

← The Scariest Halloween Story You’ll Ever Read 👻 When we search for the answers, the teacher always appears →